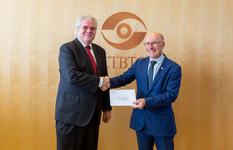 On 28 September 2022, H.E. Ambassador Lorenzo Ravano presented his credentials as the Principality of Monaco’s Permanent Representative to the Comprehensive Nuclear-Test-Ban Treaty Organization (CTBTO*) to Dr Robert Floyd, Executive Secretary of the CTBTO, in Vienna.

During their subsequent meeting, the Executive Secretary thanked the Principality of Monaco for having been one of the first countries to sign and ratify the Comprehensive Nuclear-Test-Ban Treaty (CTBT) in 1998. He also took advantage of the opportunity to emphasise the importance of each State Signatory establishing its own National Data Centre to make use of the data produced by the CTBTO’s International Monitoring System,** particularly seismic and hydroacoustic data.

H.E. Mr Lorenzo Ravano congratulated the Executive Secretary on the progress made in ratifying the CTBT, and was delighted to note that the treaty now has near universal adherence. The Ambassador reaffirmed the Prince’s Government’s commitment to multilateralism and encouraged the Secretariat to promote multilingualism in the organisation’s work and documentation.

Finally, H.E. Mr Ravano and Dr Floyd discussed the organisation’s concerns about the international context, and the situation in Ukraine in particular, as well as the impact of these developments on the CTBTO’s activities.

* The CTBTO is one of the pillars of the global nuclear non-proliferation architecture. The United Nations organisation is working to achieve a comprehensive ban on nuclear testing. The CTBT now has 186 State Signatories, of which 175 have ratified the Treaty. For more information, see: https://www.ctbto.org/

** Through its International Monitoring System (IMS), the CTBTO is able to provide warnings about tsunamis and other natural disasters, and to contribute to scientific research at sea, on land and in the atmosphere.