Today, Marie-Pierre Gramaglia, Minister of Public Works, the Environment and Urban Development, visited the post office in the Place des Moulins, which has been renovated recently by the Public Buildings Maintenance Office.

The improvements involved creating a 3rd counter and a counter for people with disabilities.  In addition, the activities of the Financial Advisor have been transferred to the La Scala post office (Monte-Carlo).  These renovations followed the closure of the Larvotto office, as part of the redevelopment of public facilities in connection with the "Palais de la Plage" project.

The post office in the Place des Moulins serves 93,000 customers per year.  It covers a sector with 5,939 private letter boxes (25% of the total number of letter boxes in the Principality) and 125 businesses.

A report is available on Monaco Info. 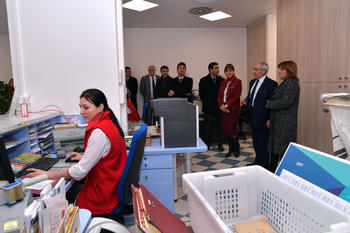