Work on the "Testimonio II" real estate project will commence with preparatory work, including construction work to enable the Boulevard du Larvotto to be diverted in front of the area of the future project, via the implementation of a temporary bridge over the Avenue Princess Grace.

Piling work for the building and its structure make it necessary to implement temporary one-way traffic in the Avenue Princesse Grace in the outgoing direction from Monaco towards the "Monte-Carlo Beach," between the "Roccabella" building and the roundabout situated in front of the "Monte-Carlo Bay" establishment.

Access to and from the garages of the "Meridien Beach Plaza," the "Rocabella" and the "Sporting d’Eté" will remain open throughout the duration of the construction work.

Moreover, the creation of the temporary bridge will necessitate the temporary removal of three bus stops:  the "Larvotto" terminus and the "Sea Club" stops on the outward and return journeys.  The "Plages" bus stop will become the new temporary terminus for the Monegasque Bus Company's routes 5 and 6.

The itineraries of the intercity buses (route 110, Airport), which currently serve the "Meridien Beach Plaza" and "Monte-Carlo Bay" hotels, will be as follows:

Furthermore, the existing taxi stand by the two above-mentioned hotels will be moved to an area near the "Bahia" building.

Implementation of this one-way system will begin on Monday 24 October 2016 for a duration of approximately 7 months.

As a reminder, the Testimonio II project will provide:

In addition, the project will include a private housing programme. 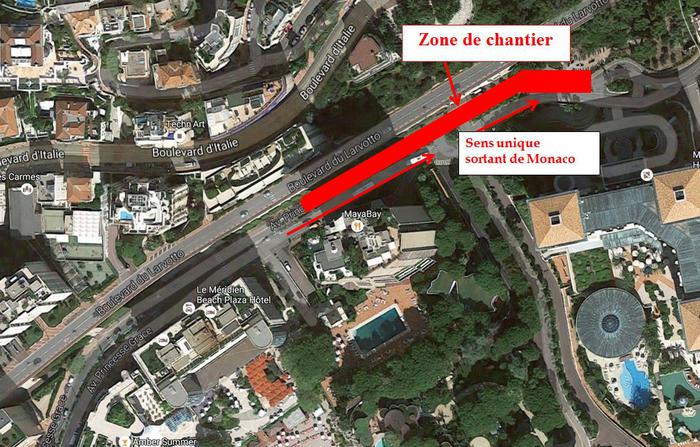