In connection with the first work on the Offshore Urban Extension Project in the Portier Cove, which is due to commence in the coming weeks, a Sovereign Ordinance has been published in the Journal de Monaco of Friday 3 February to establish a "working area in which access to the public is forbidden."  This area, marked by yellow buoys, extends from the Larvotto Marine Reserve in the east to the Spélugues coral reef in the west.  Sailing and anchoring boats is strictly forbidden in this area.  Fishing, underwater fishing, bathing and underwater diving are also prohibited in this zone. 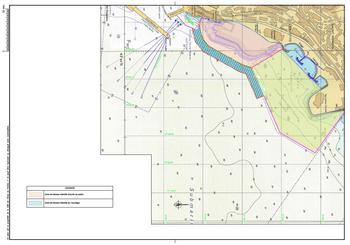 Adjacent to this area, "a working area in which anchoring boats is forbidden" extends across a strip 60 metres offshore, in front of the Larvotto Marine Reserve in the east to the Spélugues coral reef in the west.

These two areas have been created for safety reasons, giving access only to ships involved in operations related to the Offshore Urban Extension Project.  Underwater diving in connection with this work will also be permitted.

Sovereign Ordinance No. 6.256 of 30 January 2017 regulating navigation, anchoring, fishing, underwater fishing, sea bathing and water sports and underwater diving in the working area of the Offshore Urban Extension Project in the Portier Cove:http://journaldemonaco.gouv.mc/Journaux/2017/Journal-8315