Monaco Takes Part in the Intergovernmental Conference to Adopt the Global Compact on Safe, Orderly and Regular Migration 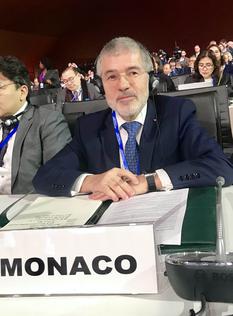 A Monegasque delegation*, led by Patrice Cellario, Minister of Interior, took part in the high-level Intergovernmental Conference to adopt the Global Compact on Safe, Orderly and Regular Migration, held in Marrakech on 10 and 11 December 2018.

The draft Compact, the adoption of which was decided upon in the United Nations' New York Declaration for Refugees and Migrants of 19 September 2016, was approved by 190 member States on 13 July 2018, after several months of consultation and negotiation under the auspices of the United Nations.

This document is the first comprehensive reference framework to cover all aspects of international migration and applies to all forced migration, including displacement resulting from climate change.

The aim of the Global Compact on Migration, which is a non-binding document, is to promote international cooperation to manage the phenomenon of migration, while respecting the sovereign right of States, in order to promote legal migration channels and combat irregular migration.

In his speech, Mr. Cellario recalled the importance Monaco places on multilateralism, cooperation and international solidarity.

Monaco's support for the pact was an opportunity to highlight the Principality's commitment to respecting and promoting the rights of the most vulnerable people in the context of migration, in particular migrant women and children, combating human trafficking and the trafficking of migrants, promoting inclusive societies and combating the effects of climate change.

*:  Marie-Noëlle Albertini, Diplomatic Advisor to the Minister of Foreign Affairs and Cooperation and Saïda Abouid, Coordinator of the activities of Monaco's Official Development Assistance in Morocco.