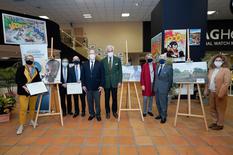 As a reminder, 19 photos taken by the Monegasque ISOs who took part in the Photo Competition on the theme of "A Sustainable and United View" were displayed in an exhibition, which was inaugurated by H.S.H. the Sovereign Prince on the Terrasses de Fontvieille on 12 April.

The aim of this exhibition was to raise public awareness and highlight the activities of each ISO.  Passers-by were also able to vote for their favourite photo for the Public Prize.  In total, more than 2,700 votes were cast;  due to the pandemic, the voting process was entirely digital.

During the ceremony, three Prizes were awarded:

-          The Public Prize, presented by H.S.H. the Sovereign Prince, which was won by Oasis for Peace for its photo entitled "Un projet solidaire et un projet de paix à la fondation FOAP en Colombie" ("A Solidarity Project and a Peace Project at the FOAP Foundation in Colombia");

-          The Grand Jury's Prize1, which was awarded to AMREF for its photo entitled "Maria et sa valise peuvent changer l’histoire d’une génération de femmes" ("Maria and her Suitcase can Change the History of a Generation of Women");  and

-          The Youth Prize, chosen by pupils from Monegasque schools2, which was won by the Monaco Humanitarian Collective (MCH) for its photo "Chut, la vie reprend ses droits ! ("Ssh, Life is Recommencing!").

As a reminder, the ISO platform groups together 49 international solidarity organisations in Monaco (NGOs, service clubs, foundations and associations), with the aim of creating a network and sharing skills (www.osimonaco.org ).

2- Schools that took part in the vote:  the Ecole Saint-Charles, the Ecole FANB and the Ecole de Fontvieille.