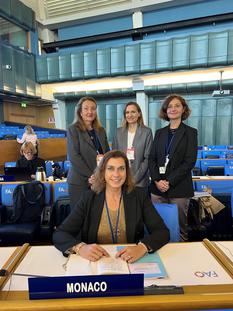 Having been a member since 2015, the Principality of Monaco took part in the work of the 50th session of the Committee on World Food Security (CFS) from 10 to 13 October in Rome. The theme for this year’s session was “Coordinating Policy Responses to the Global Food Crisis. The State of Food Security and Nutrition in the World 2022.”

Followed this year by 124 members and nearly 1,700 participants, the CFS is an international platform that enables all stakeholders (governments, international and regional organisations and civil society) to work together on recommendations and guidelines designed to ensure everyone’s rights to adequate food.

The annual report The State of Food Security and Nutrition in the World (SOFI 2022), which was presented at the beginning of the session, estimates that 828 million people suffered from famine in 2021. Despite coordinated political and humanitarian efforts, this figure represents an increase of 150 million compared with 2020, and severe food insecurity increased further, now affecting 11.7% of the global population. The COVID-19 pandemic, the impact of climate change and the increase in the number of conflicts in the world have aggravated the existing systemic crisis, which now calls for urgent responses if the Zero Hunger goal included in the 2030 Agenda is to be achieved.

On 11 October, the International Day of Rural Women 2022 was also celebrated. To mark the occasion, the members of the CFS were keen to agree a consensus draft of the Voluntary Guidelines on Gender Equality and Women’s and Girls’ Empowerment in the Context of Food Security and Nutrition, to be presented at the Committee’s plenary session in October 2023.

The Prince’s Government is actively involved in efforts to combat hunger as part of its international development policy. In 2022, it is investing more than EUR 3 million in food security and nutrition initiatives in primarily African countries. The Food and Agriculture Organization (FAO) and World Food Programme (WFP) are key partners in helping the most vulnerable populations to feed themselves in areas that are struggling as a result of climate change and conflict. Support for school meals is a flagship programme of Monaco’s Official Development Assistance.