The Fleet of Electric Taxis is a Great Success! 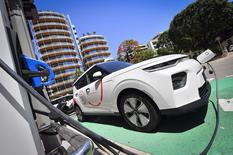 The fleet of 20 electric taxis was put into service in early July on the initiative of the Prince's Government, led by the Ministry of Finance and Economy.  It has met users' expectations perfectly and is enjoying real success in the Principality - during the first month of trials, this fleet undertook more than 8,000 journeys.

This initiative, which is the result of successful collaboration between the taxis, State departments, members of the National Council and the office of the Monaco Association of Independent Taxi Operators (AETIM), is even expanding, since, at a working meeting on 31 July, which was an opportunity to make a first assessment, it was decided that neighbouring towns could also be served from Friday 2 August, provided that the intramural taxi service is still provided.

Customers will now be able to travel from Monaco to Cap d'Ail, Beausoleil and Roquebrune Cap Martin (as far as the Quatre Chemins roundabout) at the current rate for these towns, i.e. a set fare from EUR 25 with no waiting.

CORONAVIRUS : One new recovery on Sunday

12 July 2020 Press release
The Fleet of Electric Taxis is a Great Success!
Contact us
http://en.gouv.mc/A-la-Une-du-Portail/The-Fleet-of-Electric-Taxis-is-a-Great-Success