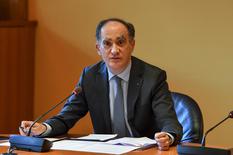 The Prince’s Government presented some additional economic support measures at the National Council yesterday evening. The Prince’s Government’s approach to this issue seeks to be pragmatic, responsive to businesses and, above all, aligned to the uncertain duration of the current health crisis.

As with the health crisis, when it comes to the economic crisis, there are actions, barrier measures, a treatment and, one day, a phase of re-establishment and convalescence.

All of the essential measures taken to tackle the health crisis will have an economic impact.

The initial barrier measures taken on the economic and social side relate to the deferment of social security contributions and the use of full or partial temporary layoffs.

As such, a decision was taken last week to introduce a two-month deferment of the payment of VAT collected by businesses for those that request it. This deferment has now been extended to three months. Only the requirement to report VAT returns remains.

Internal VAT, however, as an indirect tax on consumption, will be due.

With regard to financial measures, the initial actions taken as a first step will be strengthened.

The existing measure, which stipulates that companies in the Principality financing a structural investment with a bank loan can now request an interest subsidy on this business loan, will be extended to other companies which request it. This subsidy involves reducing the interest rate charged by the bank for the duration of the loan with a lower limit fixed at the EURIBOR rate +0.75%. The interest subsidy will now be extended to a rate of 0%.

In practical terms, this means that an entrepreneur, retailer, artisan, etc. who applies to their bank for a cash flow loan or an overdraft will pay a de facto interest rate of 0%. Any interest charged by the bank will be covered by the State.

This fund, which may be increased as the situation evolves, is designed to support economic development in the Principality. The amount covered by the guarantee, currently set at 65%, is being increased to 100%.

This means that the State will step in to pay off loans on behalf of entrepreneurs, retailers, artisans, etc., who are not able to repay the loans that they have taken out. To date, the guarantee fund has been replenished by lending institutions and the State on an equal basis. Now, the State is taking on this responsibility.

The Prince’s Government is aware that this situation is particularly difficult for the self-employed, and is considering the implementation of an exceptional minimum income that will be slightly higher than the Monegasque minimum wage. The self-employed will not be abandoned.

The Government has introduced an exceptional measure for retailers occupying state-owned premises. They will be exempt from paying all rent and charges for the entire second quarter of 2020. This is a cancellation of the payment due, not a deferment. Those who have paid rent for March will be reimbursed.

Office and industrial businesses continue to operate, some at a more reduced rate than others, but all will experience a negative impact on their business and revenue. With assistance from the Monaco Order of Accountants (OECM), we are now close to finalising a procedure that will help us to offer them significant support too.

Finally, the Government has also decided – in anticipation of the National Council passing bill No. 1003, based on proposed law No. 238 on Monegasque nationals and their partners carrying out a business activity at home in a state-owned apartment – to exempt those liable from payment for 2020. Those who have already made part payment will be reimbursed, while anyone currently liable will be exempt.

The Prince’s Government is also launching an appeal to private owners, asking them to show a sense of civic responsibility by changing or spreading out the payments due by their tenants. This is in the interests of both owners and tenants. Owners whose tenants are experiencing difficulties can and must do their bit. Owners whose tenants are bankrupt will need to face up to their responsibilities. It would be regrettable if the Government had to go further and propose that the National Council introduce legislation in this area, but no option will be excluded.

The Prince’s Government is clear that funding all of these measures will impact the balance of the public finances. As set out in the Constitution, the Constitutional Reserve Fund will need to make up for this expected deficit, the first in eight years, due to both the foreseeable drop in revenue and the temporary and exceptional increase in some areas of expenditure.

This is precisely what a reserve fund should be used for: to tackle the financial aspects of an unexpected situation without increasing taxes or issuing debt, while maintaining the Monegasque economic and social model and the country’s capacity to recover and invest in the future.

“CELEBRATE YOUR NEIGHBOURHOODS” in the Principality