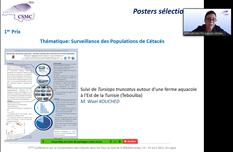 The 5th Conference on Cetacean Conservation in South Mediterranean Countries (CSMC5), hosted by the National Centre for Marine Sciences of Lebanon (CNRS-L) was held online from 13 to 15 April 2021. The conference was organised by the ACCOBAMS Secretariat in partnership with the Regional Activity Centre for Specially Protected Areas and received financial support from the Principality of Monaco.

More than 70 participants (experts, researchers, PhD and other students) from the ACCOBAMS region took part in the conference, along with several international organisations, including the General Fisheries Commission for the Mediterranean (GFCM), the Black Sea Commission (BSC) and the European Commission’s Directorate-General for Maritime Affairs and Fisheries (DG MARE).

The aims of the CSMC5 were to provide an update on the status of our current understanding of cetaceans in the South Mediterranean, to identify any gaps and to encourage the development of conservation activities to promote implementation of the ACCOBAMS recommendations.

Over the course of the three days, five scientific sessions were organised on the following topics: interactions between cetaceans and human activities – fishing and accidental capture, underwater noise, whale watching; cetacean strandings; monitoring of cetacean populations; and areas of significance for cetaceans.

These sessions provided an opportunity to share experience and information, and to consider the best approaches and actions to achieve a thorough understanding of cetacean populations in the South Mediterranean.

There was also a training workshop focused on use of the digital platform NETCCOBAMS for cetacean conservation.

Thanks to financial support from the Principality of Monaco, a competition to select the best information posters presented by the PhD and other students was organised.

Isabelle Rosabrunetto, Director General of the Ministry of Foreign Affairs and Cooperation, awarded Wael Kouched, a postdoctoral student at the National Institute of Marine Sciences and Technology in Tunisia, first prize for his poster titled: “Monitoring the Tursiops truncatus in the vicinity of a fish farm in Eastern Tunisia”. Mr Kouched will be invited to Monaco for the celebrations of the 25th anniversary of ACCOBAMS and the 14th Meeting of the ACCOBAMS Scientific Committee, planned for November 2021.