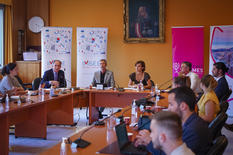 Monaco Statistics (IMSEE) recently published an initial study on the gender pay gap in Monaco. The study, a first for the Principality, was requested when the Women’s Rights Committee was set up “to determine the actual situation in Monaco.” It provides an overview of the situation in the public and private sectors in 2019, taking account of the specific context in Monaco and the structure of the country’s workforce. “A sound statistical methodology based on an ‘all else equal’ analysis was developed in partnership with the French National Institute of Statistics and Economic Studies (INSEE) and validated by the Scientific Council for Statistics and Economic Studies, chaired by Professor Pierre-André CHIAPPORI,” said Alexandre Bubbio, Director of IMSEE.

IMSEE drew primarily on an analysis of civil servant and state employee salary indices, produced using data from the Human Resources and Training Department, and on information supplied by the Monaco Social Security Funds for private-sector employees.

In the public sector, pay is more or less equitable. The distribution of salary indices by gender shows that, on average, the index for women in the civil service was 0.7% higher than that for men in 2019. Nearly half (47%) of senior positions are occupied by women.

In the private sector, pay is less equitable but the situation is balanced. Based on the difference between the median salaries of men and women as defined by the OECD, Monaco has a pay gap of 5.9% in favour of men. This means that the Principality would rank among the 10 most equitable countries in this area, ahead of France (in 24th position with a gap of 11.8%), the average for EU countries (11.1%, ranked 19th) and the average for OECD countries (12.6%, 25th), if it were an OECD member.

IMSEE also endeavoured to take its analysis of private-sector salaries further. The calculations were performed using a monthly and hourly base to mitigate the effect of working hours, which generally differ according to gender. In 2019, the average hourly wage earned by women was 20.9% lower than that of their male peers. For the purposes of comparison, during the same period this gap was 17.1% in the Alpes-Maritimes, 17.3% in the Provence-Alpes-Côte d’Azur region and 15.4% in metropolitan France, according to INSEE (gender pay gaps are higher in major cities and in border areas, where the highest income levels are concentrated). This option also makes it possible to work around the inability to draw comparisons on the basis of equal work or equal qualifications. In effect, it is simply impossible to analyse two situations which are absolutely identical in terms of sex, qualifications, age, work responsibilities and career path.

The pay gap in Monaco is therefore in line with the average for the regional employment market, despite the specific nature of the Monegasque workforce due to the inclusion of high-level athletes, particularly in football and basketball, where the highest salaries, paid exclusively to men, have a significant impact on the size of the gap.

Further study of salaries in the private sector was carried out using an econometric model that enabled the influence of certain characteristics of the observed gap to be measured, thereby producing an “all else equal” outcome.

This initial attempt to analyse the gender pay gap has given the Principality a tool that can be used to support public policy on gender equality at work. The study will be repeated at regular intervals to demonstrate changes in the situation over time.

The results of the study on measuring pay gaps are available on the website https://www.imsee.mc/