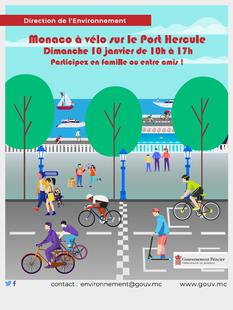 Cycling Sunday on 20 September last year was a huge success, and so the Prince’s Government intends to make it a regular occurrence going forward.

You are therefore invited to take part in a Cycling Sunday event on 10 January from 10 a.m. to 5 p.m. on the lower part of the F1 Grand Prix circuit (the same set-up as on 20 September).

This fun event, for young and old alike, aims to encourage the reclaiming of an area usually occupied by cars.

There will also be activities on Quai Albert I (opposite Rue Princesse Caroline).

The Police Department will be offering road safety instruction for cyclists and an awareness workshop on the risks associated with alcohol consumption.

The Union Cycliste de Monaco (Monaco Cycling Union) will supplement this with cycling workshops for young people, and the provision of information for adults on best practice for sharing the road with the aim of making soft mobility a less stressful option.

Finally, the Monegasque Bus Company’s Monabike service will be made available to the public for free, alongside electric scooters and bikes from traders in the Principality (Monaco Bike Pro, Monecobike, Stajvelo, The Bike Shop).

For everyone’s safety, please note that all under 18s must wear a helmet when riding bikes or scooters.

This event, organised by the Department of the Environment with support from Club VE and Monaco City Hall, will fully comply with health regulations and barrier measures. Participants not engaging in sporting activity will be required to wear a mask and hand sanitiser will be available.

Finally, the event will require traffic restrictions, with several streets closed completely from 9.30 am to 5 p.m.:

It should be noted that the following will be open to traffic: