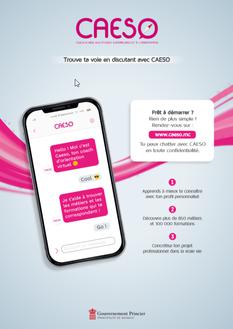 "How do I become a physiotherapist, lawyer, electrician or salesperson?  What career path should I choose?  What is ParcourSup and how is it used?  Or "What will change with the reform of the Baccalaureate?"  From Year 10 onwards, pupils - and their parents – start to ask themselves many questions about their educational and professional future.

"Career choice is a major concern for pupils and families who need to find their bearings when faced with increasingly varied educational choices, the reform of the Baccalaureate and the changes required to access higher education," explained Nicolas Rodier, technical advisor at the Department of Education, Youth and Sport.

That is why the Prince's Government decided to help secondary and high school pupils in the Principality by adding an all-digital coach to the existing support available (for example careers advisors).  Through the "Extended Monaco, Smart Principality" programme, it has therefore created a digital career advice app, entitled CAESO, which stands for "Coach d'Aide aux Etudes Supérieures et à l'Orientation" ("Coach for Higher Education and Careers Guidance Assistance").

After an experimental phase, CAESO, which is provided by the start-up Ovvy, has been offered to all pupils in Years 10 to 13 in State schools and private schools under contract since the start of the 2019 school year.  In practical terms, CAESO enables them to find out about more than 850 occupations and 100,000 training courses.

"After consultations with CAESO, pupils have ideas for careers, information on training courses, "Parcoursup" careers advice and the reform of the Baccalaureate, as well as recommendations for post-Baccalaureate studies that suit their career plans," emphasised Nicolas Rodier, who stressed that "the aim of this scheme is to make pupils more involved in their career choices and increase their self-confidence."

The data is entirely confidential

This free web chat is accessible via the website www.caeso.mc .  With their personal access code - distributed by the OVVY company in class – pupils (with the authorisation of their parents) can connect to the web chat from their personal phone or from the computers and tablets provided by the school.

They can then interact with CAESO as they wish, consult their profile page, edit the documentation and develop their projects.

1,200 Laptops Have been Distributed to Pupils in the Principality - The Digital Secondary School - A New Phase in the Future of National Educati