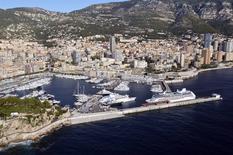 World Environment Day, initiated by the United Nations, has been observed on 5 June since 1972. In 2019, the focus will be on air pollution, a major global problem that is responsible for more than 7 million deaths per year. Nine out of ten people breathe polluted air.

This year’s theme invites us to consider how we can change our daily lives and behaviours in order to reduce the pollution we produce and breathe easier! #BeatAirPollution

At the 1st WHO Global Conference on Air Pollution and Health in Geneva from 30 October to 1 November 2018, H.S.H. Prince Albert II announced that the Principality would be joining the BreatheLife campaign, jointly led by the World Health Organization (WHO), UN Environment and the Climate and Clean Air Coalition to encourage cities and individuals to act to protect our health and the planet from the impact of air pollution.

On the symbolic date of 5 June, Ministers Marie-Pierre Gramaglia and Didier Gamerdinger will officially sign the Principality up to the BreatheLife network, and the country will commit to improving air quality by achieving the targets set by WHO by 2030. It will do this by promoting the use of clean vehicles, reducing emissions from heating and air conditioning in buildings, limiting the amount of waste that is incinerated and favouring alternative energy sources such as ocean thermal energy.

Since 1995, the Principality has monitored air quality on a daily basis at five locations throughout the country, using stations which measure pollutants including particulates, nitrogen oxides, sulphur dioxide, ozone, carbon monoxide and some metals. Changes are currently being made to enable levels of very fine particulates produced by burning to be assessed.

Thanks to a partnership with AtmoSud, the Accredited Air Quality Monitoring Association for the Provence Alpes Côte d’Azur Region, which has been in place since 2015, air quality forecasts for the Principality as a whole can be calculated and published. These forecasts are communicated to residents on a daily basis via the Government website (https://bit.ly/30W0Xhv ) using an Air Quality Index (AQI).

As part of the Smart City programme, we will also be installing micro air quality sensors on public transport shelters.

Principality of Monaco joins forces with 14 other countries in appeal to world’s governments - “Work together to protect nature!”