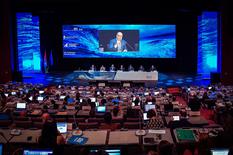 The 51st Plenary Session of the IPCC (Intergovernmental Panel on Climate Change), which is taking place at the Grimaldi Forum Monaco from 20 to 23 September, was opened this morning with a speech by H.S.H. the Sovereign Prince, in the presence of more than 500 scientists and experts from around the world.  In particular, He pronounced this sentence, which summarises His state of mind in the face of the climate challenge, "It is the worst of times," as my friend Sylvia Earle, the great oceanographer, once wrote, "but it is the best of times, because we still have a chance."

At the end of this Session, the IPCC's special report on the oceans and the cryosphere (ice floes, glaciers and polar ice caps) in the context of climate change is to be presented to the international press at the Oceanographic Museum on 25 September.  This publication, which is the latest in a series of three special reports, one on limiting global warming to 1.5°C (October 2018) and one on climate change and land (August 2019), has been given the title of "The Ocean and Cryosphere in a Changing Climate."