Extension of the CTTR to 31 March 2021 : "A Powerful Indication of the State's Commitment to Safeguarding Employment" 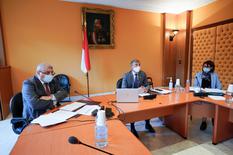 At a Press briefing a day after the announcement by the Minister of State at a public session of the National Council of the extension of the CTTR (Strengthened Provisions for Total Temporary Layoff) until 31 March 2021, Didier Gamerdinger, Minister of Health and Social Affairs, spoke to the Press about this key measure to promote the Monegasque economy.

"The extension of the Strengthened Provisions for Total Temporary Layoff until next spring is a significant measure, budgeted at EUR 9M per month. It meets the needs of many professionals who fear renewed difficulties at the end of the summer season, which has been marked, in particular, by the cancellation of several major events in September-October," stated Mr. Gamerdinger.

For her part, Pascale Pallanca, Director of Employment, nevertheless explained the changes to the scheme, stating, "For all activities that are strongly impacted by the crisis (such as events, culture, leisure, sport, travel agencies, hotels, restaurants, convenience stores, transport, nightclubs, etc.), no proof will be required.  For activities that have been impacted as a secondary effect, such as the wholesale trade, printing, and consulting and management companies, proof of a decrease in turnover of at least 30% will be required."

The Minister added, "Since the CTTR is regarded as assistance with returning to work, it is essential that the business activity is maintained, in order to continue benefitting from this assistance. Finally, if a social plan is put in place,  a business will be subject to a reduction in the amount of CTTR, i.e. the remaining salary costs to be paid by the business will increase from 20% to 30%."

With regard to the health aspect of his press release, Didier Gamerdinger welcomed the Monegasque population's efforts in adhering to the COVID-19 barrier measures, which have proved successful.  "The figures for the past fortnight attest to this - the incidence rate (positive cases per 100,000 inhabitants) is 31.58 compared to 74.9 in Nice and 104.9 in France. With more than a thousand tests per week, the Principality has a positive rate of 2.67 % (compared to 8.2 % in France).  Incidentally, Monaco carries out twice as many tests as Italy and the city of Nice, and its PCR rate per 100,000 inhabitants exceeds that of Switzerland, Marseille and Paris," he declared.

Despite this progress, the Minister nevertheless specified that "the Principality is in a position to carry out up to 1,850 PCR tests per week if necessary, in line with the stated principle that all symptomatic cases should be tested within 24 hours and the results made known within the following 24 hours."

The Board of Auditors Presents the 2020 Annual Public Report to H.S.H. the Sovereign Prince

Economic Recovery Plan : Free Occupation of the Public Highway for Terraces of Shops and Restaurants