Philippe Boisbouvier and Hubert Nde Sambone, Director of the FIU of Cameroon and President of the French-speaking FIU Group.  ©DR

SICCFIN, the Principality's Financial Intelligence Unit (FIU), represented by Philippe Boisbouvier, Karine Imbert and Jenny Perrot, took part in an inter-sessional meeting of the EGMONT Group, held in Jakarta, Indonesia, from 29 to 31 January 2019.

The EGMONT Group is an international organisation that now includes 159 FIUs.  Its mission is to combat money laundering and the financing of terrorism (AML/CFT).

These agreements, concluded on the basis of a model framework agreement validated by the EGMONT Group, aim to facilitate and strengthen the exchange of information between signatory countries, with a view to optimising investigations.  Their implementation is subject to various reciprocal guarantees.

During their trip to Jakarta, the members of the Monegasque delegation played an active role in the activities of several working groups, including the "Exchanges and Cooperation," "Assistance and Training" and "Procedures and Policies" groups.

Additionally, they had many fruitful discussions with members of other delegations.

Several contacts were also made in connection with the signature of new cooperation agreements at the 26th plenary meeting of the EGMONT Group, to be held at The Hague, in the Netherlands, in July 2019. 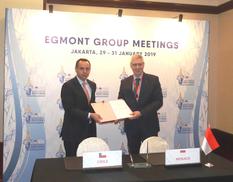 Philippe Boisbouvier and Javier Cruz Tamburrino, Director of the FIU of Chile. ©DR