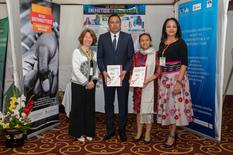 Although sickle cell disease is the world’s most common genetic disease with 50 million carriers, primarily in countries in the tropics, very few doctors and nurses are currently trained to treat it.

The common guide to treating sickle cell disease in Africa is the result of close collaboration with referring doctors and patient associations within the sickle cell disease network set up by Monaco’s Official Development Assistance authorities and covering Burkina Faso, Madagascar, Mali, Mauritania, Niger and Senegal.

A compendium of knowledge and best practice gathered from doctors who have long been involved in fighting the disease, the guide is a practical tool aimed at all practitioners, whether they are based in city hospitals or rural health centres.

Each of the six ministers penned an introduction for the version of the guide to be published in their own countries, welcoming the initiative and the remarkable progress made in combatting the disease.

Following wide distribution in the six countries, the Department of International Cooperation, STEPS Consulting, which led the work over the course of three years, and the contributing doctors will evaluate its use and impact on patients.

Combatting sickle cell disease has been a flagship programme of Monaco’s Official Development Assistance policy for more than ten years. It is based on three pillars: treat, train and create a network dynamic.