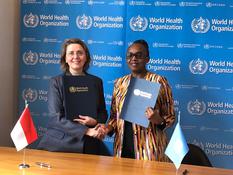 H.E. Ms Carole Lanteri, Ambassador and Permanent Representative of the Principality to the Office of the United Nations in Geneva ©DR

In light of the fact that Africa accounts for 93% of global malaria deaths, the Principality of Monaco and the World Health Organization (WHO) Regional Office for Africa have forged a new partnership aimed at eventually eradicating the disease on the continent.

The partnership was signed on Tuesday 28 May 2019 at the World Health Assembly in Geneva, Switzerland, and envisages a contribution of EUR 2 million from the Prince’s Government over a period of five years. This money will help WHO to work with eight countries in the Sahel region (Burkina Faso, Cape Verde, Chad, Mali, Mauritania, Niger, Senegal and The Gambia) to accelerate the eradication of malaria. More than 374 million people in the region are at risk of contracting the disease, although it is avoidable and treatable.

“It is only with the generous support of our donors and partners that WHO will achieve the shared goal of a future without malaria in Africa,” said Dr Matshidiso Moeti, WHO Regional Director for Africa. “Grants like the one from the Principality of Monaco help to ensure that we can continue to make progress, particularly in the countries most affected by this disease.”

In the view of the Prince’s Government’s Minister of Foreign Affairs and Cooperation, Gilles Tonelli, “this new investment recognises the enormous burden that malaria places on African countries, and the crippling impact of the disease on the region’s socio-economic development.”

The agreement between the Principality of Monaco and WHO will contribute to the work of the Regional Office for Africa by providing support and technical assistance to the eight Sahel nations. This will include helping to strengthen programmes, build technical capacity, and improve collaboration and cooperation in the sub-region.

The Principality of Monaco first established a relationship with the WHO Regional Office for Africa in 2007. Monaco supported WHO’s efforts to control malaria in Southern Africa and polio in Niger, health systems strengthening work in Madagascar, and emergency health interventions during the Ebola epidemic in West Africa in 2014. A grant of EUR 3.65 million over the period 2010–2018 also helped to strengthen malaria surveillance and evidence-based programming in the context of eradicating malaria, and contributed to sub-regional coordination.