Visit to Mali by the Minister of Foreign Affairs and Cooperation 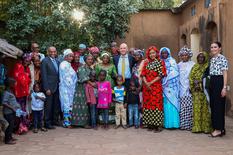 From 12 to 14 February 2020, a Monegasque delegation,* led by Laurent Anselmi, Minister of Foreign Affairs and Cooperation, visited Mali to hold talks with the Malian authorities and meet the partners of Monaco's Official Development Assistance.  This working visit made it possible to strengthen the relations of friendship and cooperation between the two States.

During their stay in Mali, the Monegasque delegation was received by the Malian Minister of Health and Social Affairs.  At this meeting, Laurent Anselmi and Michel Sidibe signed two Memoranda of Understanding on the fight against sickle cell anaemia, the world's most prevalent genetic disease.

This working visit, during which official meetings alternated with field trips, provided an overview of the various partnerships undertaken with the Malian authorities and with the partners of Monaco's Official Development Assistance in the areas of civil protection, health, education and the socio-economic integration of the most vulnerable populations.  An official ceremony to hand over equipment to the National School of Civil Protection in Bamako and renew the partnership with the Food and Agriculture Organization of the United Nations (F.A.O.), with the aim of strengthening food security for women in Northern Mali, were also on the agenda of this visit.

Finally, Laurent Anselmi took part in a ceremony, alongside the former Malian Head of State, Amadou Toumani Touré, President of the Fondation pour l’Enfance (Children's Foundation), to inaugurate the Mali-Monaco-SHARE cardiac catheterisation unit at the Mother and Child Hospital in Bamako, in the presence of the Monegasque association SHARE, the sponsor of the project.

As a reminder, bilateral cooperation between the Principality of Monaco and Mali was initiated in 2006.  It was strengthened in 2011 with the signing of a Framework Cooperation Agreement on the occasion of a visit to Monaco by the former Malian President, Amadou Toumani Toure, as well as in 2012 with a State Visit to Mali by H.S.H. the Sovereign Prince.  In March 2019, the second session of the Bilateral Cooperation Commission between the two countries was held in the Principality. 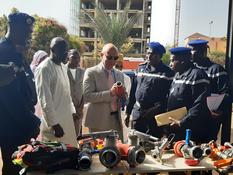