Signature of 1st Framework Cooperation Agreement between Monaco and Niger 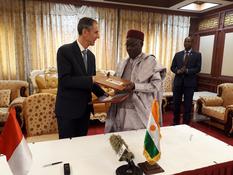 From 18 to 21 March 2019, a Monegasque delegation* led by Gilles Tonelli, Minister of Foreign Affairs and Cooperation, paid a working visit to Niger for discussions with the Nigerien authorities and to meet the partners working with Monaco’s Official Development Assistance. The visit provided an opportunity to sign the 1st Framework Cooperation Agreement between the two nations.

During the four-day visit, the Monegasque delegation was received by Nigerien head of state Mahamadou Issoufou, Minister of Foreign Affairs, Cooperation, African Integration and Nigeriens Abroad Kalla Ankourao, and a number of regional authorities.

In addition to strengthening links with the Niger authorities, the trip was a chance for the Prince’s Government to take stock of its special partnership with this French-speaking Sahelian nation which is among the least developed countries. Niger faces some enormous challenges, particularly with regard to security and food. Monaco’s partnership with the country is set to grow significantly over the 2018–2020 period.

Visits to projects provided an opportunity to discuss the various actions being taken on food security, malnutrition and health, including with the Institut Pasteur, the Mérieux Foundation, the Ministry of Health, and local and international NGOs.

The Monegasque delegation also signed an important partnership with the National Food Crisis Prevention and Management Mechanism. As part of the 3N (Nigériens Nourrissent les Nigériens, Nigeriens Feeding Nigeriens) initiative, which is doing everything possible to improve the country’s food self-sufficiency, the delegation took part in two highly symbolic launches:

Finally, the working visit culminated in the signature of the 1st Framework Cooperation Agreement between the two nations by Gilles Tonelli and Kalla Ankourao on Thursday 21 March. “Ensuring that vulnerable groups have access to basic rights – food, health and education – is the very essence of Monaco’s approach to international cooperation,” said Gilles Tonelli at the signing. “For more than a decade, the Principality of Monaco has been helping the Nigerien authorities to respond to the complex challenges, including climatic and social challenges, facing the country. We must pool our efforts to support the development of Niger’s people!”

Bilateral cooperation between Monaco and Niger began in 2008 with the signature of a framework agreement on health.