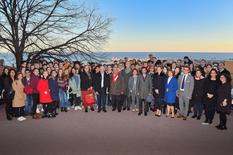 From 21 to 25 January, the Department of International Cooperation held a week-long Winter School at the Sciences Po Middle East-Mediterranean Campus in Menton. Now in its fifth consecutive year, the School features themed lessons designed to raise awareness and inspire vocations among first-year students.

The theme for this year’s Winter School, which is a unique opportunity to promote Monaco’s international image as a country that cares, was “Vulnerable children in Africa and the MENA* region”. The Department of International Cooperation’s partners covered the issue from various complementary angles: the basic principles of child protection, health and nutrition, children without family support, and a special focus on vulnerable children in Lebanon.

The speakers, all recognised figures in the field of international cooperation and development, were drawn from both local NGOs, such as Tahaddi in Lebanon, Bayti in Morocco and Samusocial in Mali, and international organisations including the International Committee of the Red Cross (ICRC), World Food Programme (WFP), UN Refugee Agency (UNHCR) and UN Relief and Works Agency for Palestine Refugees in the Near East (UNRWA).

During a series of round tables, lectures and themed workshops held over a period of five days, the 130 or so students representing more than 40 nationalities in their first year at the Sciences Po Campus in Menton gained an introduction to the basic principles of development aid and the specific challenges involved in working with vulnerable children. The aim of the Department of International Cooperation is to transfer knowledge and to inspire these future leaders to find their vocations in serving the vulnerable populations of developing countries.

Dr Xavier Emmanuelli, founder of Samusocial Paris and Samusocial International, and the former French Secretary of State for Emergency Humanitarian Aid, closed the 5th Winter School with a discussion of the conditions faced by children living in exile, at an event also attended by Mr Gilles Tonelli, Minister of Foreign Affairs and Cooperation.