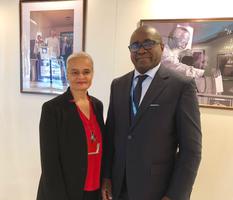 The annual session of the World Food Programme (WFP) Executive Board opened on 18 June 2018 with a high-level meeting on the Sahel attended by President of the Republic of Niger H.E. Mr Mahamadou Issoufou, who also chairs the G5 Sahel, where the WFP declared a level 3 emergency.

At the meeting, Martine Garcia-Mascarenhas, Second Secretary at Monaco’s Embassy in Italy and Deputy Alternate Representative to the FAO and WFP, made a speech highlighting the tenth anniversary of the partnership between the Principality of Monaco and the WFP, and the Prince’s Government’s 2018–2020 development aid strategy, which has made food security one of its four priorities. She announced the launch of a new partnership with the WFP on food fortification in Niger as part of the President’s 3N initiative Les Nigériens nourrissent les Nigeriens (Nigeriens Feeding Nigeriens), which fits with the 2030 Agenda for Sustainable Development.

On the margins of the session, as part of the “Be the Legacy” celebrations of the centenary of President Nelson Mandela’s birth, Ms Garcia-Mascarenhas met Sory Ibrahim Ouane, WFP Representative and Country Director in Niger, who welcomed Monaco’s growing commitment to helping children suffering from malnutrition (43% of children under five in Niger).