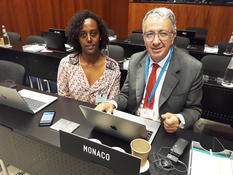 A Monegasque delegation, comprised of H.E. Mr. Robert Fillon, Ambassador, Permanent Representative to the Rome-based multilateral organisations and Ms. Yordanos Pasquier, Senior Programme Manager at the Department of International Cooperation, attended the annual meeting of the Executive Board of the World Food Programme (WFP), which took place in the Italian capital from 10 to 14 June 2019.

At this session, the actions and aid programmes that the WFP is implementing in the various regions of the world in which food security is not ensured were studied.  While highlighting some major progress that has been made in food provision, David Beasley, Executive Director of the WFP, also noted major difficulties in delivering international assistance in certain countries that are affected by armed conflict, such as Yemen.  The Executive Director also highlighted the increasing disruption caused to the most vulnerable agricultural production systems by climate change.

The Principality of Monaco, which is committed to Sustainable Development Goal 2 (Zero Hunger), has made food security one of its four priorities for action.  In 2019, the WFP thus became the first multilateral partner of Monaco's Official Development Assistance, with six development projects supported by Monaco in the Sahel, Madagascar and Burundi, in addition to emergency aid.  Almost EUR 800,000 has already been allocated in 2019.