A Monegasque delegation,* led by Isabella Rosabrunetto, Director General of the Ministry of Foreign Affairs and Cooperation, visited Lebanon from 18 to 22 June 2019 to discuss the partnerships supported by Monaco’s Official Development Assistance in the fields of health, education and socio-economic inclusion of the most vulnerable groups. 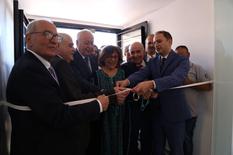 Coming a little more than a year after Minister of Foreign Affairs and Cooperation for the Prince’s Government Gilles Tonelli travelled to the country, this visit was also an opportunity to strengthen the bonds of friendships between the two nations during talks at the Lebanese Ministry of Foreign Affairs.

At the invitation of the Mérieux Foundation, Lebanese NGO Amel and the Municipality of Douris, supported by Monaco, Ms Rosabrunetto, alongside Lebanese Minister of Health Dr Jamil Jabak, took part in the official opening of a Mother and Baby Health Centre in Douris, located in the Beqaa Valley. Gilles Tonelli participated in the official ceremony to lay the foundation stone for the same centre in April 2018.

“The facility that we are celebrating is a perfect illustration of the importance that you – and we – attach to the health and wellbeing of people in this region of Lebanon, which has suffered so much,” said Ms Rosabrunetto at the opening. “This year, as we mark the thirtieth anniversary of the United Nations Convention on the Rights of the Child, I am thinking particularly of the children. It is for them that we must provide the best possible protection in order to secure their future.”

After a meeting with Claudio Cordone, Director of the United Nations Relief and Works Agency for Palestine Refugees in the Near East (UNRWA) in Lebanon, Ms Rosabrunetto travelled to the Bourj el-Barajneh camp in Beirut, where she visited a health centre and learned about the daily challenges faced by Palestinian refugees, particularly in terms of accessing health care.

Continuing with the theme of health, which is the primary focus for Monaco’s Official Development Assistance in Lebanon, the delegation headed to Kefraya, in the Beqaa Valley, to witness the care provided by a mobile medical unit operated by the Lebanese Association of the Knights of the Order of Malta (ALCM) at an unofficial Syrian camp. At the end of the visit, the delegation shared some time with elderly people at the ALCM day care centre, which the Prince’s Government has been supporting for more than three years.

Bilateral cooperation between the two countries began in 1993. Monaco has invested a total of more than 6 million euros in Lebanon to tackle socio-economic challenges. The Principality of Monaco benefits from the active presence of a Consul in Lebanon: Cheikh Bechara K. El Khoury. In light of the current crisis in Syria, the Principality has been keen to step up its support to the country. Lebanon currently hosts more refugees per head of national population than any other country (there is one refugee for every three Lebanese citizens). 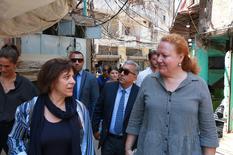