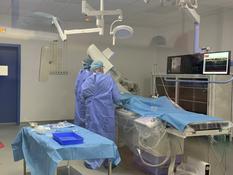 The Principality of Monaco, in cooperation with Monegasque charity SHARE, Fondation pour l’Enfance and other charities and individuals, has funded the construction of an interventional cardiology unit at Le Luxembourg Mother and Child Hospital in Bamako. The unit will provide catheter-based treatment to dilate or clear the arteries in the event of a heart attack.

The very first operations at the cardiac catheterisation unit took place during the morning of Wednesday 4 September in the presence of a Monegasque delegation which included Dr François Bourlon, Medical Director of Monaco’s Cardiothoracic Centre and Vice President of SHARE.

In the afternoon, H.E. Mr Michel Hamala Sidibé, Mali’s Minister of Health and Social Affairs, held a private meeting with the Monegasque delegation to discuss the prospects of the unit, which is scheduled to be officially opened during the first quarter of 2020.

H.E. the Minister visited the interventional cardiology unit the following day. “We are here to support a fantastic initiative. This is a promising partnership between the Principality of Monaco and Le Luxembourg Mother and Child Hospital. We have one of the most advanced departments in terms of new medical technology in the cardiology field,” he said. Dr Bourlon said: “A cardiac catheterisation facility is a great asset for the people of Mali.”

Work on building and equipping the unit began on 7 April 2017 and cost around EUR 1.5 million, financed to a large extent by the Prince’s Government of Monaco, SHARE and its financial partners. SHARE also provided support to train the entire medical and paramedical team over several years. This initiative continues the efforts of the Monaco Humanitarian Collective to allow children to be treated closer to home. 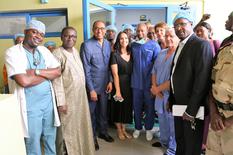