Bilateral Commission for Cooperation between - Mali and Monaco 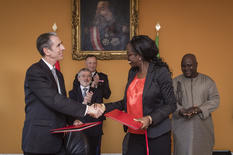 As part of efforts to strengthen friendship and cooperation between the Republic of Mali and the Principality of Monaco, the second Mali–Monaco Bilateral Commission for Cooperation was held on 15 March 2019 in Monaco. During their stay, the Malian delegation led by H.E. Ms Kamissa Camara, Minister of Foreign Affairs and International Cooperation, had the opportunity to hold discussions with Monegasque public and private organisations that are partnering with Mali.

The second meeting of the Bilateral Commission falls within the context of the 2011 Framework Cooperation Agreement between the two nations and follows on from Minister of Foreign Affairs and Cooperation Gilles Tonelli’s working visit to Bamako in April 2017. The Commission has helped to strengthen friendship and cooperation between the Republic of Mali and the Principality of Monaco, to review the outcomes of aid provided since 2006 and to consider new opportunities for partnership.

Over the last three years, assistance from the Prince’s Government has made it possible to improve living conditions for 136,000 people, and has primarily targeted children, young people and women.

Following their discussions, two memoranda of understanding on civil protection and support for vulnerable children were signed by H.E. Ms Camara and Mr Tonelli, in the presence of

Over the course of two working days, the Malian delegation visited and held discussions with Monegasque organisations which partner with the Prince’s Government in Mali: the Monaco Cardiothoracic Centre, Princess Grace Hospital, Monaco’s Vocational and Catering School and the Main Emergency Response Centre of the Fire and Emergency Service Headquarters. The delegation also met representatives from Monaco’s private sector at a reception attended by members of the Monaco Economic Board and the Club of Monegasque Entrepreneurs in Africa (CEMA).

More information will follow on Monaco Info and social media from this evening.

Joint press release on the 2nd session of the Bilateral Commission for Cooperation between the Republic of Mali and the Principality of Monaco (427.24 kB) 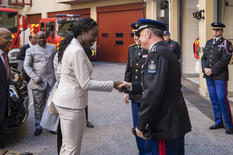