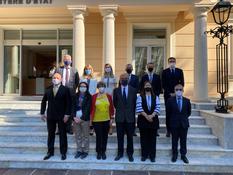 A delegation from the European Commission against Racism and Intolerance (E.C.R.I.) visited Monaco from 31 May to 2 June 2021. It was comprised of Mr. Bertil Cottier (Switzerland) and Ms. Kristina Pardalos (San Marino), accompanied by Ms. Elena Malagoni and Ms. Sophie Kurt (E.C.R.I. Secretariat).

This independent Commission, which was established in 1993, organises visits to all Council of Europe Member States, in five-year cycles. It then draws up policy recommendations on how each country could address the problems identified and forwards them to the governments concerned.

This was the fourth visit of the Commission to the Principality since Monaco joined the Council of Europe in 2004. On the occasion of this visit, the terms of the Monegasque Constitution of 17 December 1962 were recalled, in accordance with which the Principality is a State governed by the rule of law and committed to respecting basic rights and freedoms.

During their visit, the experts from the E.C.R.I were received at the Cabinet of H.S.H. the Sovereign Prince. They met with Robert Gelli, Secretary of State for Justice, Director of the Department of Justice; Didier Linotte, President of the Supreme Court; Sylvie Petit-Leclair, Public Prosecutor; and Jérôme Fougeras Lavergnolle, Vice-President of the Court of First Instance. They also met with representatives of the National Council, Monaco City Hall, civil society and the High Commissioner for the Protection of Rights, Liberties and for Mediation.

In addition, round tables were organised, attended by this Commission and representatives of the Government, the Department of Justice and the Employment Tribunal. The topics discussed were equality and effective access to rights; hate speech and hate violence; and integration and inclusion.

This visit was an opportunity for the experts to take stock of the measures implemented in the Principality and initiate new ones, particularly in combating racism and intolerance in the context of new information technologies. The experts agreed that situations involving hate speech remain rare in the peaceable Monegasque society, and emphasised the quality of the steps taken in the field of education.