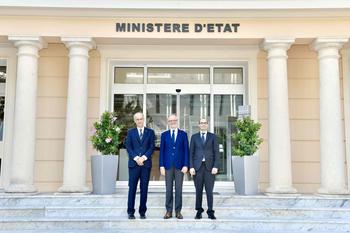 Photo caption, from left to right: Antoni Marti Petit, Prime Minister of Andorra, Serge Telle, Minister of State of the Principality of Monaco, and Nicola Renzi, Minister of Foreign and Political Affairs and Justice of San Marino

On Friday 13 July 2018, H.E. Mr Serge Telle, the Minister of State, welcomed Mr Antoni Martí Petit, the Prime Minister of Andorra, and Mr Nicola Renzi, the Minister of Foreign and Political Affairs and Justice of San Marino, accompanied by delegations,* for discussions on progress made in negotiations with the European Union (EU) since March 2015.

The working meeting at the Ministry of State provided an opportunity for the three delegations to review the negotiating strategy and schedule, and the areas in which the three nations can advocate common positions.

The meeting was followed by a press conference during which Serge Telle stated: “These regular meetings at the head of government level are important because they allow us to assess the political environment in which our three nations are negotiating with the European Union, and to see to what extent we can work together to defend what makes us unique. We have heard the European Union’s call to reach a political agreement before the Juncker Commission’s term of office comes to an end in 2019. We are ready to work to ensure that this negotiation proceeds under the best possible conditions. That said, this agreement is more important than it is urgent. We will not sign an agreement that does not take account of our specific needs.”

Serge Telle, Nicola Renzi and Antoni Martí Petit then participated in the celebrations of the French national holiday organised on the Port of Monaco by the French Embassy.