The future of coral reefs: what are the solutions for tackling the threats? Monaco brings together top international experts from 3 to 7 December 2018 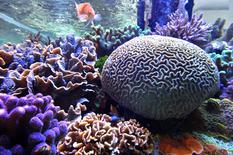 The first General Meeting of the International Coral Reef Initiative (ICRI) under Monaco’s co-chairmanship will be held from 5 to 7 December at the Yacht Club de Monaco. At the invitation of the Monaco Scientific Centre, the Monaco Ocean Acidification Association and the ICRI, panels of high-level international experts and representatives from coral reef countries will gather in the Principality from 3 December for a week of work dedicated to preserving coral reefs, which are facing a particular threat from climate change. This is a major challenge for the future, as noted in the recent Intergovernmental Panel on Climate Change (IPCC) report on the devastating effects of an increase in global temperatures.

Reducing the risks of climate change for coral reefs: solutions?

Sharing ideas and points of view, prioritising measures for action in order to preserve reefs: these are the tasks facing the workshop organised by the Monaco Scientific Centre and the Monaco Ocean Acidification Association on 3 and 4 December. Among the 14 experts renowned for their work on reefs expected to attend will be Australian professors Terry Hughes and Ove Hoegh-Guldberg, both recipients of the Prince Albert II Foundation Climate Change Award, in 2018 and 2014 respectively.

Coral reefs are some of the most endangered marine ecosystems, subject to the negative impacts of local factors like pollution and coastal urban development and, since the late 1980s, also threatened by ocean warming and acidification. Extreme warming events have led to recurring episodes of large-scale coral bleaching and mass mortality, and these episodes are unfortunately likely to become increasingly frequent over the coming decades.

While the Paris Agreement seeks to limit global warming to an average temperature of between 1.5 and 2°C above pre-industrial levels, it is being implemented far too slowly and there is no certainty that the objectives set can be achieved. In any case, even warming of 1.5 or 2°C will have significant negative consequences for coral reef systems.

This is why, in addition to mitigation measures, other solutions must be devised in order to reduce the risks, including by working at the local level on protecting habitats and ecosystems or on biological and environmental adaptation.

It is vital that the scientific community reaches consensus on the respective contributions of the various approaches to reducing the impact of climate change in order to send a clear message to policymakers on the measures that should be put in place.

The think tank Ocean Solutions Initiative aims to provide clarification on this issue.

The conclusions of this workshop will contribute to the IPCC’s sixth assessment report, and several of the experts attending the workshop are on the panel. The IPCC report will be an important part of climate change negotiations conducted through the United Nations.

On 4 December, there will also be an expert workshop on innovative finance, organised by the ICRI in partnership with the Conservation Finance Alliance. This session will provide an overview of the financing opportunities in marine conservation focused on coral reefs and related ecosystems.

More than 20 blue finance experts are expected to attend the workshop to discuss Blue Bonds, payment for ecosystem services, and the global fund for coral reefs (an initiative led by the Prince Albert II Foundation and the Vulcan group, which was announced at the Our Ocean conference in Bali).

H.E. Mr Bernard Fautrier will open this working session at the Monaco Oceanographic Museum. It is aimed at the various stakeholders and professionals involved in the conservation and management of marine and coastal environments, as well as representatives from civil society and academia, and policymakers from governmental and intergovernmental bodies.

The ICRI, under the co-chairmanship of Australia, Indonesia and Monaco, will hold its General Meeting at the Yacht Club de Monaco from 5 to 7 December.

The ICRI is an informal international initiative which bring together governments, international organisations, scientific bodies and NGOs with the goal of reversing the trend towards degradation of coral reefs and related ecosystems throughout the world.

More than 60 participants are expected to attend the General Meeting, including representatives from the organisation’s founding countries: the United States, Japan, the United Kingdom, the Philippines and France.

During the course of the meeting, the ICRI Secretariat’s 2018–2020 action plan will be presented for approval. The plan seeks to be ambitious, pragmatic and realistic, offering a response to the numerous human-induced pressures facing coral reefs. There will also be an update on the International Year of the Reef (IYOR) 2018, and the tremendous commitment shown by ICRI members around the world.