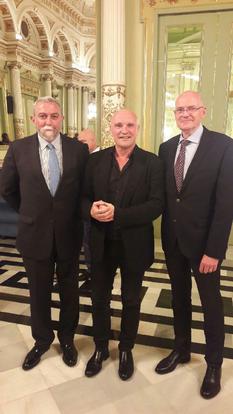 On Tuesday 15 May, H.E. Mr. Jean-Luc Van Klaveren, Ambassador of Monaco to Spain, held a reception in honour of the Ballets de Monte-Carlo, which had performed "Le Songe" ("The Dream") at the Gran Teatre del Liceu, Barcelona from 16 to 19 May.

The Ambassador, accompanied by diplomats from the Embassy and the Honorary Consul General of Monaco in Barcelona, invited local figures, including the Lieutenant General of the Civil Guard, the Chief of Police of Catalonia, the Chief of the Catalan Air Sector and Ms. Agatha Ruiz de la Prada, to the Casa Fuster.

Twenty-nine foreign Consuls who are stationed in Barcelona were also present at this reception.

This event was an opportunity for the Ambassador to receive his guests in a very convivial atmosphere, to present Monaco's excellent cultural offer, and, finally, to bring some of the guests together prior to a performance of "Le Songe" the following evening.

On Wednesday 16 May, the first of five performances of Jean-Christophe Maillot's "Le Songe" was given a standing ovation by a packed audience at the Gran Teatre del Liceu in Barcelona.

Following the show, H.E. Mr. Jean-Luc Van Klaveren and his guests attended a cocktail party organised by Monaco Tourist and Convention Authority, at which they were able to talk to Jean-Christophe Maillot, Choreographer and Director of the Ballets de Monte-Carlo and to the dancers of the Compagnie des Ballets de Monte-Carlo, in a relaxed and warm atmosphere.