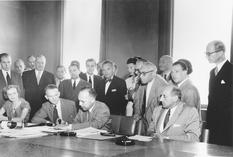 As part of the 70th anniversary of the Convention Relating to the Status of Refugees, which was signed in Geneva on 28 July 1951, the Principality of Monaco, in conjunction with the Office of the United Nations High Commissioner for Refugees (UNHCR), has set up a digital exhibition in the passenger shelters provided by Monaco City Hall.

From 26 July to 1 August, through a series of photographs from the UNHCR's archives, this digital exhibition looks back at seven decades of forced displacement in the world since the adoption of the 1951 Convention. Thus, it aims to raise public awareness of the rights promoted by this Convention - such as the fundamental principles of "international protection" and "non-refoulement" - as well as the situation of forcibly displaced people, by highlighting their stories and life experiences in various parts of the world.

The aim of this exhibition is to celebrate the courage of people who have been forcibly displaced, and, through their resilience, continue to hold out the hope of a better future. As at the end of 2020, almost 82.4 million people had been displaced worldwide, an increase of 2 million compared to 2019.

The Prince's Government, which is particularly aware of the situation of displaced people, ratified this Convention in 1956.  The Convention remains as relevant 70 years later as it was in 1951, and helps to save lives.