Partnership agreement signed by Monaco Fire and Emergency Service and Civil Defence Instruction and Intervention Unit No. 7 in Brignoles 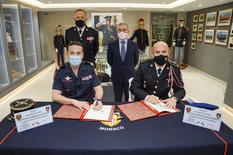 The signing ceremony was attended by Patrice Cellario, Minister of the Interior, and Colonel Tony Varo, Supreme Commander of the Military Force, and illustrates the Principality’s determination to maintain the links which have connected the two units for many years.

The main aspects of the partnership will help to develop the professional skills of each unit, particularly in the areas of training, maintenance of operational knowledge and operational reinforcement.

UIISC 7 is a unit of the Army’s engineering corps, which is at the disposal of the French Ministry of the Interior. Its primary role is to provide back-up to regional emergency services in France and serve as France’s first response unit in foreign countries which have suffered a climate disaster or industrial accident. It also carries out a lot of training for army and emergency response units in France and abroad.

The Monaco Fire and Emergency Service is responsible for preventing and fighting fires and hazards of all kinds, providing emergency assistance to individuals and protecting property within the Principality of Monaco.