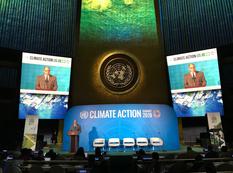 Against the background of the unprecedented climate emergency, H.S.H. Prince Albert II took part in the Climate Action Summit held in New York on 23 September in advance of the United Nations General Assembly.

Global greenhouse gas emissions continue to increase, the last four years have been the hottest on record, sea levels are rising and coral reefs are dying. The impact of climate change is already making itself felt throughout the world, with real consequences for people’s lives, whether in terms of their health or food security. But the current commitments which countries have made are still not enough to achieve the goals set out in the Paris Agreement of limiting the increase in global temperatures to less than 2°C, or even 1.5°C, by 2100.

It is for this reason that the United Nations Secretary-General António Guterres wanted to bring together leaders from all over the world – heads of state and government, business leaders, youth representatives and representatives of civil society – to strengthen ambition on climate issues, given the scale of the challenge that we are facing.

In this context, H.S.H. the Sovereign Prince reaffirmed Monaco’s commitment to implementing a strong energy transition policy, with the aim of achieving carbon neutrality by 2050.

He also emphasised the Principality’s efforts at the international level, including on promoting the need to protect the oceans which are particularly vulnerable to climate change but also harbour opportunities for climate action. Driven by this conviction, Monaco had joined the Nature-Based Solutions Coalition, one of nine thematic partnerships established ahead of the Summit.

Finally, H.S.H. the Prince noted that the Principality stood in solidarity with the most vulnerable populations and announced that Monaco would contribute to replenishing the Green Climate Fund, the primary financial tool for implementing the Paris Agreement in developing countries.