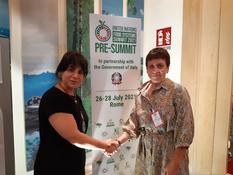 A number of ministerial roundtables covered the action tracks for the forthcoming Summit. This event, known as the “People’s Summit” will be held in New York in September, and will tackle the challenges raised by the pandemic, which has increased food insecurity across the world (811 million people were affected in 2020, 161 million more than in 2019), an issue also exacerbated by escalating conflict and the impact of climate change. The contribution of science and the various action coalitions which have been announced will provide the foundation for transforming food systems to make them more sustainable, inclusive and resilient to ensure human health and the health of the planet, and to accelerate implementation of the 2030 Agenda for Sustainable Development and its Sustainable Development Goals, particularly Goal 2 on ending hunger.

In a special segment, the School Meals Coalition: Nutrition, Health and Education for Every Child was presented. This will be launched during the Summit, an initiative from Finland and France, led by the World Food Programme (WFP) in partnership with the FAO, the International Fund for Agricultural Development (IFAD), the World Health Organization (WHO) and the United Nation’s Children’s Fund (UNICEF). Monaco, along with many other States, has signed a declaration committing to support the coalition, which is seeking to ensure that all schoolchildren can benefit from these programmes by promoting the empowerment of girls and the resilience of the most vulnerable rural communities. These are priority issues for Monaco’s Official Development Assistance, along with local agricultural production.