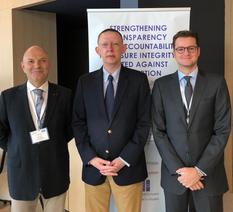 From left to right: Laurent Anselmi, Secretary of Justice; Mr Marin Mrčela, Chairman of GRECO and Vice President of the Supreme Court in Croatia; and Jean-Laurent Ravera, Head of the International Law, Human Rights and Fundamental Freedoms Section of the Department of Legal Affairs © DR

On 15 and 16 October, Secretary of Justice Laurent Anselmi, accompanied by Jean-Laurent Ravera, Head of the International Law, Human Rights and Fundamental Freedoms Section of the Department of Legal Affairs, represented the Principality of Monaco at a conference organised by the Croatian Ministry of Justice in cooperation with the Group of States against Corruption (GRECO) of the European Council.

The conference was held in Šibenik (Croatia) under the theme “Strengthening transparency and accountability to ensure integrity: united against corruption.”

An opportunity for the most highly qualified international experts to come together with leading policymakers and officials to share views, the conference was attended by numerous ministers of justice, senior judges and representatives of national anti-corruption agencies and NGOs from around the world.

During the conference’s general session and subsequent specialised panels, the importance of press freedom and the role of the media in promoting transparency to prevent corruption were discussed in depth. In light of the range of national experiences, attention was also paid to the various ways of ensuring integrity in high offices of state.

The conference agreed on the need to encourage operational cooperation and facilitate networking among national authorities responsible for preventing and fighting corruption.