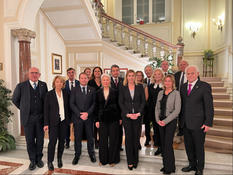 This traditional start-of-the-year meeting to which all of Monaco’s Consuls in Italy are invited, together with those from other countries where the Embassy is accredited (Croatia, Romania, Slovenia, Malta and San Marino), offers an opportunity for an update on diplomatic and consular activities undertaken during the previous year. It is also a chance to discuss planned projects and events. These include strengthening the network of “Destination Monaco Ambassadors”, designed to promote Monaco’s attractiveness in Italy, and the organisation of a special event to mark the centenary of the birth of Prince Rainier III. The latter will be held on 31 May 2023 in Rome, in parallel with the celebrations to commemorate the anniversary in the Principality. Known as the “Builder Prince”, Prince Rainier III was also a Prince determined to open Monaco up on the international stage and consolidate its diplomatic presence in Italy. It was under His Reign that the Principality purchased the sumptuous Villa Fasciotti in 1962. The building, located in the Parioli district of the capital, has been the headquarters for Monaco’s Embassy in Rome ever since.

Following a discussion of the three trips made by the Sovereign Prince to Italy in 2022 – to Puglia and Genoa in April, to Basilicata and Campania in October and to Calabria in November – the meeting continued with Fulvio Gazzola, the Mayor of Dolceacqua and President of the Associazione Siti Storici Grimaldi, who gave a presentation to the Consuls on the work of this association. Established in 2021, its purpose is to bring together areas in Italy with historic links to the Royal Family. The afternoon concluded with a cocktail reception and a convivial dinner at the Residence.

In the margins of this event, H.E. Anne Eastwood hosted the general meeting of the Associazione Siti Storici Grimaldi at the Embassy. The meeting discussed the many activities planned to showcase the richness and diversity of the communes that make up the membership of the network, and to support the members in implementing projects based on the Principality’s values, including in the field of sustainable development. With this in mind, Marco Colasanti, President of the Italian branch of the Prince Albert II Foundation, attended the meeting alongside around 20 mayors. 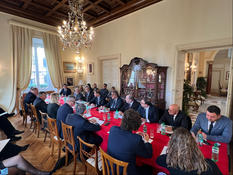