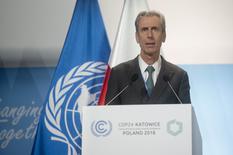 Gilles Tonelli, Minister of Foreign Affairs and Cooperation, speaking from the podium at the COP 24 high-level segment © DR

From 10 to 12 December, Gilles Tonelli, Minister of Foreign Affairs and Cooperation, accompanied by a delegation,* took part in the 24th Conference of the Parties to the United Nations Framework Convention on Climate Change (COP 24), which is being held in Katowice until 14 December.

Coming three years after the Paris Agreement, and a few weeks following publication of the Intergovernmental Panel on Climate Change (IPCC)’s special report on the impacts of global warming of 1.5 °C, COP 24’s objectives are to finalise the guidelines which will allow the Paris Agreement to become fully operational across all pillars: mitigation, adaptation, loss and damage, finance, technology transfer and capacity building.

In his speech at the opening of the high-level segment, which was attended by H.S.H. the Sovereign Prince, Mr Tonelli noted: “Following the historic momentum which produced the Paris Agreement three years ago, and the political support which led to its entry into force in November 2016, it is our duty to enable the Agreement to reach its full potential. (...) Climate change is not some vague threat that we may face at some undetermined point in the future. As shown by the IPCC’s special report on global warming of 1.5 °, it is already having a serious impact on people, ecosystems, and livelihoods. And recent devastating climate events, from which no region of the globe is spared, are a constant reminder of this alarming reality.”

The Monegasque delegation took part in a wide range of intergovernmental negotiations throughout the conference. Some of this work was done through the Environmental Integrity Group (EIG), of which Monaco is a member alongside Georgia, Liechtenstein, Mexico, the Republic of Korea and Switzerland.