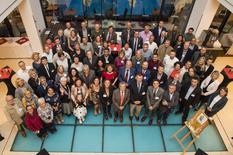 Monaco is hosting the eighth meeting of the parties to the Agreement on the Conservation of Populations of European Bats (EUROBATS) at the Novotel from 8 to 10 October.

The agreement was established in 1991 under the auspices of the Convention on the Conservation of Migratory Species of Wild Animals (CMS) due to the alarming situation with regard to bat populations in Europe.

The Principality of Monaco has been a party to the agreement since 1999 because the country is home to numerous bat species such as the European free-tailed bat and the common pipistrelle.

The main aim of the agreement is to provide a framework within which countries which are party to the agreement, as well as those which have yet to sign up, can cooperate in pursuit of a common goal: the conservation of bats throughout Europe.

On Sunday 7 October, the experts attending the meeting had an opportunity to visit the cave in the Exotic Garden and the Museum of Prehistoric Anthropology.

Hosting this meeting should allow the Principality to strengthen its commitment to the CMS, on the one hand, and, on the other, to highlight the action it is taking at the national level to promote biodiversity on land.