Monaco Takes Part in a Videoconference on the Alliance for Multilateralism 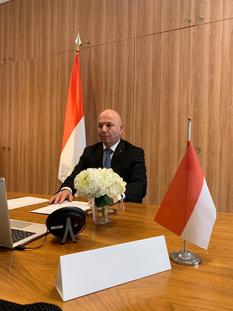 Mr. Laurent Anselmi, Minister of Foreign Affairs and Cooperation, recently took part in a videoconference in connection with the Alliance for Multilateralism. This virtual session, held as a side-event of the United Nations General Assembly, brought together more than 60 Ministers of Foreign Affairs.

As a reminder, the Alliance for Multilateralism was initiated on 2 April 2019 by the Foreign Ministers of France and Germany. It consists of an informal grouping of countries that are convinced that a multilateral order based on respect for international law is the only reliable way to ensure international peace and stability. Those who promote this alliance are also committed to the idea that the challenges the world faces can only be resolved through collective and concerted action by States, based on the objectives and principles set out in the Charter of the United Nations.

Mr. Laurent Anselmi's participation follows on from a previous ministerial meeting held on 24 February in Geneva on the sidelines of the United Nations Human Rights Council, on the theme of "Promoting International Humanitarian Law and Combating Impunity."

In his speech, the Minister addressed topics such as health, climate, digital transition and gender equality. With regard to these various topics, he spoke of the Principality's contribution and action within the framework of the foreign policy advocated and promoted by H.S.H. the Sovereign Prince.

Monaco thus expressed its desire to take its full place over the long term within this important movement, which aims to mobilise the driving forces of international order;  this is all the more salutary at a time when the pandemic is afflicting the planet.