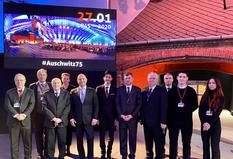 From left to right:  Mikhal Amsellem, Honorary President of the Jewish Cultural Association of Monaco;  Tomasz Wardyński, Honorary Consul of Monaco in Warsaw;  Jacques Wolzok, President of the Commission for Assistance to Victims of Spoliation;  Małgorzata Wende-Wardyńska;  Laurent Anselmi, Minister of Foreign Affairs and Cooperation;  Mr. Daniel Torgmant, Rabbi of Monaco;  H.E. Mr. Frédéric Labarrère, Ambassador to the Federal Republic of Germany;  Lorenzo Ravano, Chargé d'affaires a.i. to the Republic of Poland;  Bruno Lamour, Teacher at the Lycée Albert Ier;  Giuseppe Caminiti, a student at the Lycée Albert I;  and Mistral Zerbi, a student at the Lycée François d'Assise-Nicolas Barré ©DR

On 27 January 2020, a delegation led by Mr. Laurent Anselmi, Minister of Foreign Affairs and Cooperation, represented the Principality of Monaco at the commemoration of the 75th anniversary of the liberation of the Auschwitz-Birkenau Camp.

Under the patronage of the President of the Republic of Poland, H.E. Mr. Andrzej Duda, more than 50 Heads of State, Government and representatives of international organisations from all over the world took part in the ceremony, in a large tent that had been erected on the forecourt of the "gate of death," the entry point to the Auschwitz-Birkenau Nazi camp.

In a solemn, reflective atmosphere, the delegations listened with emotion to the poignant accounts of some of the 200 prisoners who are still living and were able to make the journey.

The Heads of Delegation then went to the foot of the international monument erected in memory of the 1.5 million men, women and children who were exterminated in the camp between 1940 and 1945, to place a candle there.