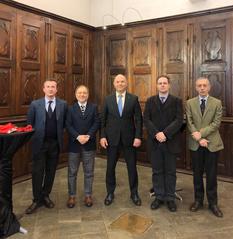 On Friday 21 February, Laurent Anselmi, Minister of Foreign Affairs and Cooperation, visited the office of the State Archives in Turin for a study day dedicated to relations between the Kingdom of Piedmont-Sardinia and the Principality from 1817 to 1860.

He was welcomed by Vice Prefect Alessandra Lazzari, Chief of Staff to the Prefect of the Province; Stefano Benedetto, Director of the State Archives; and Licia Mattioli, Monaco’s Honorary Consul in Turin.

After a few introductory words from Stefano Benedetto setting out the agenda,
Laurent Anselmi, whom the organisers had asked to open the event, gave a Monegasque perspective on the historical inclusion of the communes of Roquebrune and Menton as part of the Principality, followed by their secession under the Stupinigi treaties in 1861.

Reviewing the history of Monaco during the period under consideration, the Minister recalled some of the main highlights from this era, as noted by Monegasque writers such as Louis Frolla and Louis Aureglia, as well as the more recent work of Professor Joël-Benoît D’Onorio. He also focused on the Charter of 25 February 1848, the Principality’s first constitution, which never entered into force precisely because of the secession of Roquebrune and Menton.

Laurent Anselmi concluded his speech by noting the welcome initiative that established the “Historic Sites of Monaco” association in 2015, providing a means of maintaining and breathing new life into the links forged during this long shared history.

There were then presentations from four speakers:

It is worth noting that these presentations were all based directly on archive documents. Professor Gentile, for example, cited a note from Camillo Cavour, written in French, which considers the political balance of power following the secession of Menton and Roquebrune from Monaco.

At the end of the day’s proceedings, which were held before a sizeable audience including academics, researchers and numerous students, a tour of the State Archives was organised, offering the chance to view many rare documents.