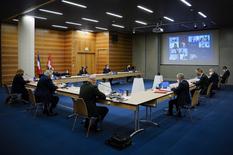 The Commission for Franco-Monegasque Cooperation met in Monaco on 18 March 2021. The meeting was held by videoconference due to the pandemic. Established in its current form by the Treaty of 2002, the Commission meets annually, alternating between Paris and Monaco, and is intended to adapt and reaffirm the friendly, cooperative relationship that exists between the two countries. It serves as a framework for regular consultation between the two countries on subjects of national interest in the sprit of their “common destiny”.

The meeting was co-chaired by H.E. Pierre Dartout, the Minister of State of the Principality of Monaco, and H.E. François Delattre, Secretary-General of the Ministry for Europe and Foreign Affairs. It was attended by H.E. Laurent StEfanini, the French Ambassador to Monaco, H.E. Gilles Tonelli, Ambassador and Special Advisor for Negotiations with the European Union, H.E. Christophe Steiner, Monaco’s Ambassador to France, and Bernard Gonzalez, Prefect of the Alpes-Maritimes. The Monegasque delegation[i] comprised members of the Prince’s Government and senior officials. The French delegation[ii] was made up of representatives from ministries involved in relations with Monaco.

Among the items on the agenda was the issue of the current negotiations on a potential association agreement between Monaco and the European Union. The two countries emphasised the need for the future draft association agreement to take account of the features which make Monaco unique in order to maintain internal balances within the Principality, as well as their commitment to respecting a number of Franco–Monegasque agreements that are useful for close cooperation between the nations. France reiterated its full support for Monaco as it continued these negotiations. With this in mind, a working meeting will be held in late 2021, before France takes over the Presidency of the EU.

In the field of e-health, the commission discussed the merits of practitioners from the Principality being granted French healthcare provider cards and of ensuring that healthcare professionals operating in each of the two countries can access patient medical records in the interests of patients and with their agreement. Discussions with a view to introducing the appropriate technical solutions will continue.

France and Monaco reviewed the implementation of the Franco-Monegasque agreement on health signed in July 2017, which has, among other things, provided a framework for France to supply Monaco with COVID-19 vaccines. The two sides agreed to emphasise the importance of this cooperation in light of the current health situation, and committed to ensuring that it was properly implemented.

Monaco informed France of its desire to be included in any potential future European vaccine passport.

The Principality of Monaco’s proposal that its hospital departments could host medical house officers following the French training curriculum as part of qualifying placements was also considered.

On employment law, two issues were the subject of particular discussion. The first related to French training schemes for jobseekers resident in Monaco. The second focused on funding for total temporary layoff measures, allowing Monegasque companies to retain their staff and thereby avoid redundancies in the event of temporary difficulties.

There was an update on progress in discussions on the maritime security and action at sea agreement, in light of the development by Monaco’s Police Department of new maritime capacity.

The development of transport is a shared concern, and so there was a general update on mobility in the Principality. In addition, the commission addressed efforts to combat traffic offences, as well as safety in the Rainier III tunnel, which links the Principality to France. Consideration was also given to improving the turnaround time for registering in France vehicles that have been sold from Monaco.

The two delegations discussed the difficulties encountered by the operators of personal transport options (taxis, private car hire, chauffeur-driven vehicles) in France and Monaco, and the need to reach a sensible agreement for all parties that would protect the activities of these operators in France and Monaco.

On cooperation, the commission considered the impact of the United Kingdom’s withdrawal from the European Union on the situation of British nationals resident or working in the Principality.

Sharing an attachment to issues relating to the French-speaking world, France and the Principality of Monaco discussed the 18th Summit of La Francophonie to be held in Djerba, Tunisia, in November 2021.

Following the meeting, two agreements were signed: an amendment to the agreement on mutual recognition of artistic education courses relating to Monaco Art School (Pavillon Bosio), and an administrative arrangement on cooperation in the field of diver training.

The two delegations agreed to convene for the next session of the Franco-Monegasque Commission in Paris in 2022 and, between now and then, to schedule a meeting of the Commission for Local Cross-Border Cooperation in Monaco.

Mr Jean-Marie VEran, Special Advisor to the Minister of Foreign Affairs and Cooperation

Ministry for Europe and Foreign Affairs

Ms Mariana Duque, EFTA Advisor at the Permanent Representation to the European Union

Ministry for Solidarity and Health

Ministry of the Interior

Ministry for the Ecological and Inclusive Transition

Ms Nathalie Alexanian, Assistant to the Head of the Personal Public Transport Section

Mr Olivier Christen, Director of Criminal Cases and Pardons
Mr Anthony Manwaring, Representative for European and International Affairs
Ms Yasmine Wasylyszyn, Assistant to the Head of the Employment and Career Management Section
Ms Anaïs Agudo, Head of Secondment to the Department of Justice

Ms Valérie Creantor, Assistant to the Head of Insurance Products and Markets