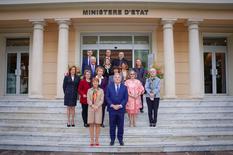 H.E. the Minister of State, Pierre Dartout, and Ms Isabelle Berro-Amadeï, Minister of Foreign Affairs and Cooperation, opened the diplomatic conference at the Ministry of State on Thursday 21 April 2022. As is traditional, the annual event was held over two days and brought together the Principality’s entire diplomatic corps.

First, the ambassadors – through ministers – provided an update on the crisis in Ukraine (situation in international organisations, financial sanctions, economic impact, etc.) and explained how it is affecting the countries to which they are accredited.

The challenges of the ongoing negotiations to reach an association agreement with the European Union were also discussed, along with other topical issues.

Among other locations, the ambassadors visited the Digital Transition Office, where they heard presentations on the Extended Monaco and Rosiers (upgrade of government information systems) programmes, and the Museum of Prehistoric Anthropology.

The Country Chief Digital Officer and the CEO of the Monaco Economic Board set out the main aspects of the digital economy which have been developed in Monaco, while the Ministry of Health and Social Affairs focused more specifically on the growth of e-health.

The diplomatic conference drew to a close with a lunch at the Monte-Carlo Bay, attended by the Minister of State and members of the Government. This was preceded by discussions on the Principality’s activity on the international stage: a recap, including pictures, of the Universal Expo in Dubai, examples of partnership to achieve peace through sport promoted by the organisation Peace and Sport, etc.

The conference is a highlight of diplomatic life in Monaco.