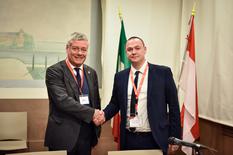 Monaco Inter Expo (MIE) signed a partnership agreement with Exclusive Brands Torino (EBT)* at the Congress Centre of the Industrial Union of Turin this morning. The agreement relates to EBT’s involvement in EXPO 2020 DUBAI as an official partner of the Monaco Pavilion.

The agreement was signed by Paolo Pininfarina, President of the EBT network of leading Piedmont businesses, and Alexandre Bocquillon, Deputy General Commissioner of the Monaco Pavilion, during an economic mission organised by the Monaco Chamber of Commerce. The signing ceremony was attended by H.E. Robert Fillon, the Principality of Monaco’s Ambassador to Italy, Licia Mattioli, Monaco’s Honorary Consul in Turin, and Guillaume Rose, CEO of the Monaco Economic Board.

“Although our two institutions are very different in nature, the partnership between them is based on our shared values of internationality, uniqueness, exclusivity and excellence, and on our joint determination to collaborate in order to make progress at a global level,” declared the instigators behind this partnership, Albert Croesi, Executive Director of MIE, and Giulio Trombetta, CEO of Costadoro S.p.A., a member company of the EBT network, which has previously acted as an official partner of the Monaco Pavilion at the events in Milan (Expo 2015) and Astana (Expo 2017).

“We are very happy with the welcome that Monaco Inter Expo has given us,” said the EBT President. “For EBT and its member companies, involvement in Expo 2020 offers a great opportunity to increase our visibility and gain publicity on an international stage. This will help to further improve the performance of the EBT network, which has already seen a rise in workforce (from 652 to 783), turnover (+37%, increasing from €159.5 million to €218.1 million) and exports (up from €81.7 million to €94.9 million)** in 2019.”

To promote this collaboration, a line of Limited Edition Monaco Pavilion Expo 2020 Dubai products produced by companies in the EBT network has been specially created using a shared graphic design inspired by the Monaco Pavilion style scheme. The exclusive products will be exhibited and sold inside the Monaco Pavilion in Dubai, and they will also be available in Italy and in companies’ key markets for a limited period coinciding with the international event.

* Exclusive Brands Torino (EBT) is a network of companies founded in 2011 at the initiative of the Industrial Union of Turin with the aim of developing and promoting a selected range of leading brands and products from Piedmont, as well as ‘Made in Italy’ products more generally, on overseas markets. Today, the EBT network comprises 19 renowned companies from all over Piedmont, representing various sectors of the economy (Allure, Altec, Bava, Building, Caffè Costadoro, Guido Gobino, Kristina Ti, L’Opificio, Lauretana, Mattioli, Nimbus, Oscalito, Pastificio Defilippis, Pepino, Pininfarina, Quagliotti, Quercetti, Relais San Maurizio, Tonatto). These upmarket brands share a select clientele and an international outlook, and stand out due to their creativity, innovation, research and product quality.