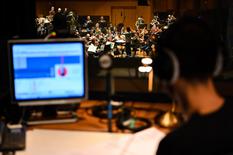 In a sign that Monegasque organisations are heavily involved with EXPO 2020 DUBAI, the Monte-Carlo Philharmonic Orchestra is already hard at work!

Maestro Kazuki Yamada has agreed to record the music for the Monaco Pavilion, which was composed by Dédé Truqui, as well as the score for the final show, co-written with Didier Benetti.

Dédé Truqui performed with Aimé Barelli’s ensemble at the Sporting Club evenings for many years. He is a musician renowned in the region for his love of Monegasque and Niçois traditions, reflected in his songs, poems, sketches and parodies.

His Fantasie monégasque blends tradition and modernity, and features several motifs: “A Tribute to Princess Grace” (Irish music), “A Tribute to Prince Rainier”, “The Rise of Prince Albert II” and a farandole with a nod to the Monegasque national anthem and the Marquisate of Baux.

Like the Pavilion itself, the piece highlights every aspect of the Principality – Monaco in 360 degrees.