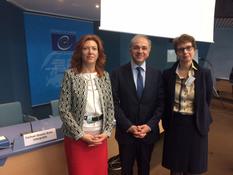 On 22 May 2018, in Strasbourg, a Monegasque delegation took part in the Conference to mark the 10th anniversary of the entry into force of the Council of Europe Convention on Action against Trafficking in Human Beings (the Warsaw Convention).

Combating trafficking in human beings is one of the global priorities with regard to respecting and promoting fundamental human rights and combating organised crime.

The Warsaw Convention is central to the values promulgated by the Council of Europe;  this instrument's main contribution is an approach based on protecting victims' rights.

This Conference was an opportunity to highlight the decisive contribution of the treaty mechanism to combat trafficking via evaluation, awareness-raising and coordination work, undertaken as closely as possible to the realities in the field.

Several panels were held on the issues of prevention, guaranteeing victims' rights, the criminal justice response and building strategic partnerships.

These discussions encouraged the exchange of information, the sharing of good practices and finally the concretisation of new avenues of work for effective action in line with the challenges.

Monaco has been a party to the Warsaw Convention since 2015 and takes part in several Council of Europe programmes related to protecting the rights of the most vulnerable who are targets of human traffickers and smugglers, in particular in the context created by the mass displacement of refugees and migrants.

The Principality, in partnership with the UNODC and OSCE, also supports several initiatives to strengthen the capacity of States to combat the trafficking and smuggling of human beings, promote preventive measures, protect the rights of victims and combat the impunity of those responsible.

Monaco is also involved in the global movement to combat criminal networks that profit from trafficking, through international cooperation activities.