Agreement signed between Monaco and the Republic of Indonesia 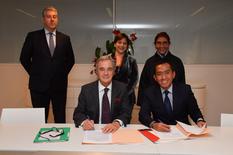 During the General Meeting of the International Coral Reef Initiative (ICRI) on Thursday 6 December, Mr Brahmantya Satyamurti Poerwadi, Director General of Marine Spatial Management (Indonesia), and Mr Patrick Rampal, Chairman of the Monaco Scientific Centre, signed a letter of intent between the Indonesian Ministry of Maritime Affairs and Fisheries and the Monaco Scientific Centre. The ceremony was attended by Ms Susi Pudjiastuti, Indonesian Minister of Maritime Affairs and Fisheries, and Ms Isabelle Rosabrunetto, Director General of the Monegasque Ministry of Foreign Affairs and Cooperation.

The signing of this agreement follows on from the bilateral meeting between the President of the Republic of Indonesia and H.S.H. the Sovereign Prince in Bali on 29 October and aims to establish cooperation between the two countries on coral reef research and conservation with a focus on:

These types of cooperation will be implemented through an agreement to be reached between the parties.