On Wednesday 27 March, the ACCOBAMS Permanent Secretariat held a conference as part of the 3rd Monaco Ocean Week. The theme was A Look at the Mediterranean: Focus on the Surprising Results of an Unprecedented Campaign and the event was attended by H.S.H. the Sovereign Prince, representatives from governments and international organisations, and members of the Soroptimist Club of Monaco, which partnered the event, and other local clubs.

A total of 80 people came together to hear the results of the first marine megafauna (cetaceans, turtles, rays, sharks and sea birds) and plastic pollution observation campaign ever carried out on the scale of the entire Mediterranean Sea. The campaign saw around 100 scientific observers from 20 Mediterranean countries make tens of thousands of observations from on board eight small aircraft and six research boats.

An initial global overview of marine megafauna numbers and distribution in the Mediterranean was gained, as well as an alarming assessment of the amount of debris polluting the sea.

In her speech, ACCOBAMS Executive Secretary Ms Florence Descroix-Comanducci appealed for a commitment not only from decision-makers, but from everyone: “It is time to act, and to put preserving biodiversity, of which we are a part, at the heart of what we do!” 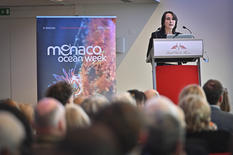