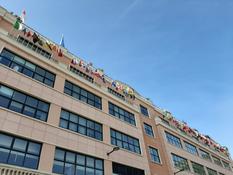 The International Hydrographic Organization (IHO) will celebrate its 100th anniversary on Monday 21 June 2021, World Hydrography Day, which is celebrated annually throughout the world.

From its headquarters, founded in Monaco by Prince Albert I, the IHO provides a forum for its 94 member States to meet and make progress on issues related to measuring the physical properties and characteristics of the ocean.

As part of the celebrations, speeches by H.S.H. Prince Albert II of Monaco, Dr. Mathias Jonas, Secretary-General of the IHO, Engineer-General Laurent Kerléguer, Director-General of the French Hydrographic and Oceanographic Service (Shom), and H.E. Mr. Peter Thomson, UN Special Envoy for the Ocean, will be broadcast live on the IHO's YouTube channel (https://www.youtube.com/channel/UCpMKDQTKKlJSXmQCQzFqZPA/featured ).

Italy will send the Amerigo Vespucci, the flagship of the Italian Navy, which is now used as a training ship for cadets.

As well as looking back at past achievements, the celebrations will also look to the future. Several autonomous vehicles and drones will also be deployed in Monaco to demonstrate modern technologies for obtaining hydro-oceanographic data.

iXblue will give a demonstration of the Drix, a 7.7m autonomous surface vehicle capable of remote-controlled or even fully autonomous operations in a supervised mode.  The Drix will undergo sea trials at the entrance to Port Hercule in Monaco on Monday 21 June from 11 a.m. to 2 p.m.

The ECA Group will present the A18D autonomous underwater vehicle (AUV) on the sea wall in Port Hercule, Quai Rainier III.  The A18D is 5.5m long, has autonomy of 24 hours, can reach a speed of 6 knots and can operate at a depth of 3,000 m.

ECA and iXblue will have stands featuring displays of technical information and video media on the Quai Rainier III in Port Hercule (on the sea wall) opposite the Amerigo Vespucci.

Staff will be available to answer questions, present new strategies for mapping the world's seabed and explain how their autonomous vehicles can collect data to support the oil and gas industry, oceanography, etc.

At 2 p.m., there will be a webinar on the implications and future of hydrography. This will include a discussion with representatives of IHO member States and industry partners such as:

- Dr. Geneviève Bechard, Director of the Canadian Hydrographic Service and Chairperson of the IHO Council

The webinar will also include presentations by partner organisations, including :

- Dr. Vladimir Ryabinin, Executive Secretary of the IOC and Assistant Director-General of UNESCO

Those wishing to attend this webinar can register via this link:

Full information on the 21 June celebrations is also available on the IHO's website:  https://iho.int/fr/les-100-ans-de-l-ohi